The Recognizing Enslaved Africans of Larchmont-Mamaroneck memorial project (REALM) seeks to honor the history, humanity and contribution of enslaved men, women, and children who helped build our community, and to recognize for today and for the future that slavery existed here. We affirm that slavery was wrong and that the individuals so wronged matter to us today and into the future. How do other communities commemorate enslavement? In this article we describe a dozen approaches. 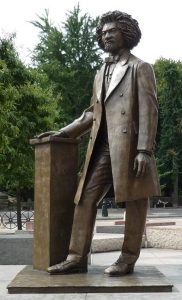 Most statues about enslavement feature remarkable people who were enslaved. Examples include the stature of Frederick Douglass at the northeast corner of Central Park in New York City, or the Harriet Tubman memorial in Harlem. In most cases, when a statue features a specific remarkable person, the purpose of the memorial is to honor that person, not enslaved persons in general or from a locality.

There are, however, statues that present a single human figure representing all or a large group of enslaved persons. An example is the sculpture at the Permanent Memorial to Honour the Victims of Slavery and the Transatlantic Slave Trade at the United Nations. This memorial focuses on enslaved people who were kidnapped and transported in transatlantic slave trade.

For a representative statue to be meaningful for a specific community, sometimes the statue is presented in a context such as a garden or park, and later in this article we will explore some examples of this approach. 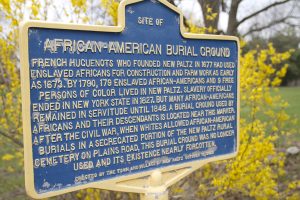 Another approach to memorialization is a plaque. Simple plaques consist of a brief statement describing enslavement associated with the place and the surrounding community.

Above is the African American Burial Ground plaque in New Paltz NY which identifies the site and also describes a part of the history of enslavement in the community. 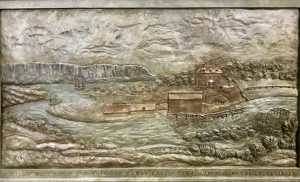 Hudson River and Yonkers in 1784 in relief, by Jacqueline Loreio for the Adrian Vander Donck Park in Yonkers NY

However, plaques can feature images of places or people, and combine those images with descriptive statements or lists of names, as is sometimes done in memorials to war veterans. 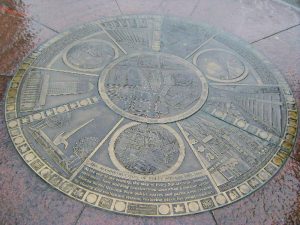 The Medallion in Foley Square

Buildings that were places where enslavement took place can be presented as commemorations of enslavement. When a local building is the site of commemoration, the community context is explicit. The New York Slavery Records Index is developing an inventory of Sites of Slavery that lists currently existing buildings and sites were documents prove that enslavement took place in the building or at the site. Frequently the names of the enslaved people and their enslavers are known. Most sites do not only feature slavery because the sites illustrates many dimensions of local history.

Museums can focus only on enslavement, or on African American history, or on a more comprehensive historical theme while dedicated a space or exhibit to enslavement. A well-known New York park and museum is the The African Burial Ground in New York City. The park includes a visitor center with images and displays.

Parks can include sites for commemorations of enslavement. Central Park in New York City has memorials to Frederick Douglass and ,

Link to REALM Request for Expressions of Interest from Artists

Our Mission: Through research, education, and civic engagement, we aim to honor the history, humanity and contributions of the 147 enslaved men, women, and children who resided in Mamaroneck Township between 1698 and 1817.

Our Goals are to: